Translated from the French by Dan Phrawzty.

tl;dr Cliquet is a Python toolkit for building APIs that implements best practices in terms of production use and the HTTP protocol.

The objective for the first trimester of 2015 was to build a service for storage and the synchronisation of a reading list. At the outset of the project we tried assembling all of the best practices and recommendations from different teams and currently deployed projects. Also, we wanted to take advantage of the Firefox Sync protocol for offline sync since it's robust and proven.

Rather than write yet another article we decided to assemble what was already out there into a more formalised protocol.

At the time we had two projects in the pipeline that obeyed more or less the same rules, so we decided go with a common implementation of these best practices (and resulting protocol) in the form of a re-usable toolkit.

What JSON structure should I use for my API? Which syntax for filtering the querystring? How do I deal with concurrent writes? And what about synchronising data on the client-side?

Today, when a new project wants to take advantage of a REST API for storing and consuming data, it is entirely reasonable to use the stock HTTP protocol and to concentrate only on the bare essentials. This goes for the clients as well, since the majority of code that handles interaction with the server is reusable.

How can I verify if the service is operational? How about StatsD? Is Sentry configured properly? How can I deploy a new version without breaking client apps?

Cliquet provides everything you need to get you started in production - by design, the transition from prototype to operational service is smooth and rapid. Out of the box, the service will have facilities for monitoring and configuration, as well as aides for deployment and version deprecation. As these realities evolve in the real world, so does the toolkit.

Which storage backend should I use for the JSON documents? What happens if the Ops team mandates that we use PostgreSQL? And what if we want to switch to a Redis, or even memory-based backend, for local testing and development?

One word: abstraction. This concept lies at the heart of our our entire implementation. Those two projects mentioned previously were, at their most simple, HTTP services that exposed a CRUD REST API backed by persistent JSON data stores. Since neither Pyramid nor Cornice (which we'll touch on later) were quite ready to handle this situation, we decided to introduce some classes to abstract the rudiments of both the REST model and of storage backends in general.

An important tenet in all of our projects is that of flexibility. This means that we try to make things optional where we can (and malleable where we can't) - Cliquet is no different. Everything is configurable right from the .ini file! What's more, all of the projects that use the toolkit are deployed in exactly the same way - only the configuration is different. 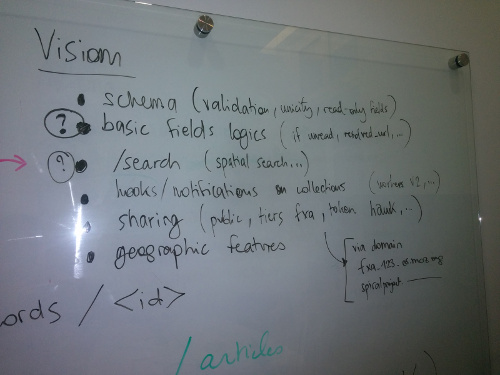 Is a REST API sufficient? Is it really necessary to re-read the HTTP spec every time? Why are we reinventing the same protocol over and over?

As a group, web developers tend to spend way too much energy on reinventing the wheel with every project, which is especially heinous since many of the decisions are arbitrary at best. This behaviour can at least partially explained by the sheer immensity of the HTTP specification, and all which it contains, including header formats, CORS support, content negotiation and mime types - not to mention trickier topics like the difference between authentication and authorisation, and how to interpret HTTP status codes...

In Cliquet, these are the principal questions we sought to answer definitively:

From an operational perspective we looked at the following:

The Cliquet protocol is thus a compilation of:

Want to know more? No problem since it's documented in great detail.

In an ideal world this protocol would be versioned and formalised in an RFC. Perhaps there would even be several implementations in different languages. [2]

Pyramid is a web framework that is responsible for all things HTTP; it is usable by projects of all sizes, great and small.

Cornice is an extension for Pyramid written by Alexis and Tarek that consists of reusable boilerplate code. The goal here is to avoid reinventing the wheel each time when building a REST API with Pyramid. Cornice handles the plumbing for things like HTTP verbs and methods, header validation, content negotiation, HTTP return codes, CORS headers, JSON schema validation, and so forth.

Cliquet, in turn, uses both Pyramid and Cornice to implement the protocol and provide the necessary abstractions; both remain available for expanding and extending from what comes in the box.

Conceptually the toolkit reflects the protocol - there are some interesting additional elements, however:

By proportion, the number of lines of code that are necessary to support REST outweighs that of any other component in Cliquet. This is a feature; Cliquet provides a wide range of functionality and can therefore be used in any number of contexts (even without manipulating data).

The primary objective of the toolkit is aid the developer in building their application with a minimum of fuss. You mix and match only what you need, and every component is guaranteed to be production-ready.

For example, the persistence furnished by default is schemaless (e.g. JSONB) but there's no reason a relational storage model couldn't be implemented. Since all of the moving parts can be replaced directly via the configuration, it's entirely feasible to extend Cliquet with business logic or other exotic elements. We've got even more ideas in the "ecosystem" portion of our documentation.

In a few weeks well be introducing the idea of "events" (or "signals") which will allow plugins to interface in a much cleaner way.

We put a high value on code readability, as well as the importance of patterns, tests, and documentation. If you have any feedback, suggestions, accolades, or criticisms, don't hesitate to let us know!

We wrote a quickstart guide that requires no knowledge of Pyramid.

Here are some examples to illustrate how straightforward Cliquet can be!

From here, most of the features of Cliquet are active and ready to be used.

For example, the hello (/v1/) or monitoring (/v1/__heartbeat__) URLs, but also the storage and cache backends that are available in the classic views in either Pyramid or Cornice.

The first step in defining a CRUD resource is to define the schema with Colander:

From here, the CRUD resource is available at /v1/bookmarks with all the synchronisation, filtering, sorting, paging, and timestamp features ready to go. By default the records are private (per user).

There's lots of room to change things up, such as the URLs and HTTP verbs, or even modifying the fields before they're saved.

Have something you'd like to say? Want to get involved? Great! We love community contributions and would be glad to help you get started.

We're quite proud of what we've built in a relatively short time frame, and as we noted in a previous article, there's a lot of potential just waiting to be tapped. Nonetheless, we are aware of a few areas where we could improve things - maybe you'd like to help?

The simple answer is that we like Python! Seriously though, the fact of the matter was that our timetable was pretty tight - we didn't have time to learn a new language.

That and the fact the whole time had just spent on a year on a Node.js project from which we needed to recover.

We definitely considered it, especially given the number of fans of the Django REST Framework in the team. Ultimately we decided that the flexibility of Pyramid's lightweight framework was a better fit.

Why not an async framework in Python 3?

At the time, the Mozilla Operations team supported only Python 2.7 in production (much to our chagrin).

That said, since our only goal is to implement a well-defined protocol, we may some day write Cliquet in aiohttp or Go if the opportunity presents itself.

Like we mentioned in a previous post (fr), JSON-API is a specification that touches on a lot of what we wanted - we didn't know about it when we started with our own protocol. Since our proposition is pretty minimalist in comparison, the idea of integrating JSON-API hasn't progressed beyond the discussion phase yet.

Is Cliquet a REST framework for Pyramid?

Beyond the CRUD resources classes in Cliquet (which implement a highly specific protocol), you must use Cornice or Pyramid directly.

It's designed from the ground up such that every component can be turned on or off, or substituted entirely, right from the configuration file (or from the environment).

If the combination of HTTP, JSON, and CRUD resources satisfies your use case, then Cliquet is a pretty safe bet for you new application. Combined with a design based on production best practices and handy abstractions, Cliquet offers a straightforward way to quickly get up and running with a Pyramid / Cornice webapp.

The built-in persistence layer is relatively simple and should fit almost any use case where the data have no particular relationship; however, you could take advantage of the full power of the protocol by using a custom Collection class to manage these relations.

As an aside, this might be a good excuse to implement the protocol within the Django REST framework. :-)

Is it possible to do XYZ?

We'd like to prepare a series of recipes and tutorials, but for that, we need to collect idea from the community. Some potential ideas include:

Can Cliquet deal with files?

No. Well, not yet at least.

We're holding off until we have a concrete need for this functionality at Mozilla. Should file storage become a thing, it would likely use Remote Storage in order to hook into that growing ecosystem.

Will feature XYZ be implemented?

Cliquet is already quite well stocked with features. In general, rather than implementing new functionality, we'd rather work on ensuring that the base abstractions and extension mechanisms are robust enough to allow for a diverse plugin-style ecosystem.